You may have seen a post I put up a while ago about Angela Ahrendts and her move from Burberry to Apple. There was a video I posted with it called ‘Burberry’s Social Story’. In this video, Angela discusses ‘blurring the digital and physical worlds’. The first time I saw it, I thought it would be a while before we saw this more prominently in the retail industry, but since then I have seen much evidence to the contrary.

Have you been in Topshop recently? They are currently engaging in a brilliant digital-physical campaign. You all know of my love of Pinterest and Topshop has created a Pinterest campaign that works online and offline. Online, Topshop is encouraging Pinners to create a Christmas board with the tag #DearTopshop with the chance of winning some amazing prizes. This feeds into the Dear Topshop gift generator that I discussed in another previous post. So Pinners generate a gift and pin it onto their #DearTopshop Christmas board. Topshop can then see which items are pinned the most and they are highlighting these items in store. In the stores, the most pinned items have tags around them, letting shoppers know whats popular. They also have boards within the store promoting the #DearTopshop competition. So online, they are encouraging Pinners to shop Topshop online or in stores, and offline they are encouraging purchasing almost through a ‘Pinterest Seal of Approval’ as well as encouraging shoppers back online to Pinterest. It all comes full circle. One feeds into the other and in turn helps the other. Its a brilliant end to end campaign. 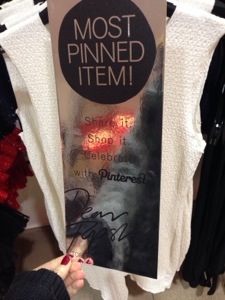 Topshop isn’t the only store engaging in this ‘Pinterest Seal of Approval’ idea. Nordstrom have a similar tactic of showing customers in stores what is popular on Pinterest. As well as this, they are offering free shipping for the most popular Pinterest items with a separate page dedicated to these items online. Target are also engaging in their own Pinterest campaign with an online store called ‘The Awesome Shop’ which is filled exclusively with their most popular items on Pinterest, while in store they also have the ‘Most Pinned’ tags.

These are just Pinterest examples, but there are many, many more examples using different digital platforms. Personally, I think its a very exciting time for retailers. Its time for shops to embrace digital and integrate it with their physical space and hopefully enrich the customer experience. Saul Berman of IBM recently wrote an article for Gigaom discussing how companies that embrace the digital-physical innovation, have more of an opportunity for success. Its time for retailers to use their imagination and to create ways of making digital-physical work for them. 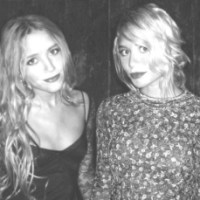